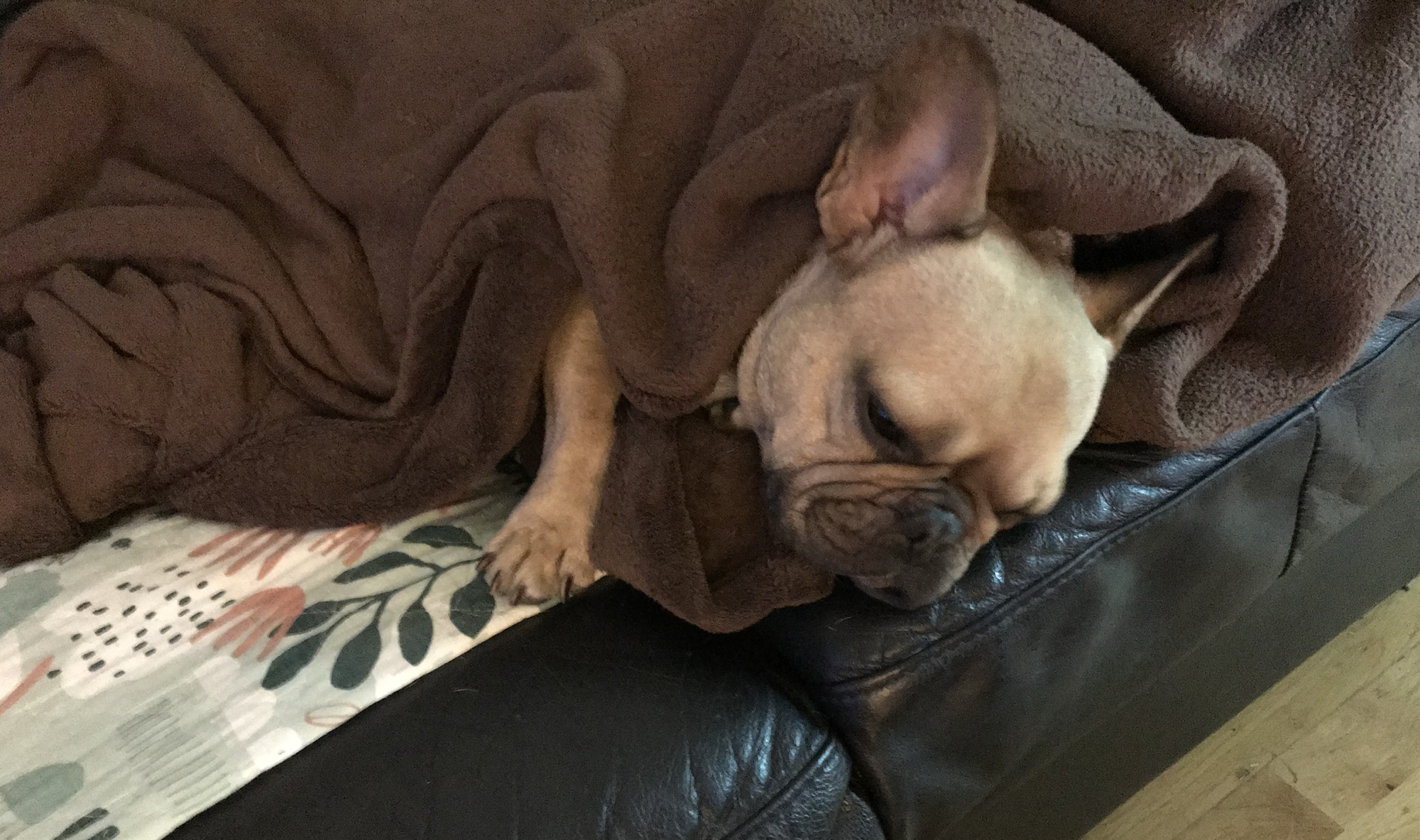 It’s been a pretty crazy week for us, because this was finally the week where Stella got admitted for her BOAS (Brachycephalic Obstructive Airway Syndrome) surgery. It’s been a bit of a saga, we’ve been waiting to sort this since she was denied her spay back in September because of her condition.

We wanted to properly document the BOAS surgery experience so anyone who stumbles on it who is thinking of getting it for their dog might have an idea of what happens from a first hand experience, as well as giving them a heads up about the unexpected parts of aftercare.

BOAS Surgery and why Stella needed it

BOAS is a common problem for flat-faced dog breeds – pugs, boxers and of course French bulldogs like Stella.

BOAS shows itself in many forms, most notably it results in the inability to breathe normally for affected doggos. As a result of inbreeding it means these dogs are born with faces too short for their tongues, collapsed, slit like nostrils, an elongated soft palette and a bunch of extra skin in the throat.

All of this results in a natural problem with breathing, and increased likelihood of developing serious problems like a collapsed trachea.

Stella suffers particularly badly, she’s a very loud breather, and cannot play or get too excited for more than around five minutes without needing a break. She suffered a BOAS attack last week when we took her in with a back problem. In addition they found a lump in her throat further obstructing her airways, so the surgery was pretty important for her.

So this week was finally the week when we got our insurance to pre-approve the recommended surgery to help her. We are insured with Co-op Pet Insurance (we’ve got the Select Plus lifetime cover plan), and they were happy to cover the surgery with recommendation from our vet.

The story of Stella’s BOAS Surgery

Stella was admitted to Vets Now in Bury on Wednesday 13th November. This was the date we’d agreed to get her sent in after her pre-approval was all sorted.

She had to have an X-Ray on her lungs to ensure she would be able to recover following her BOAS attack the week before and fluid being on her lungs which could impact her recovery.

We were talking to the vet for a while as he took us through the pre-op, the operation itself and the aftercare.

We discussed the mass in her throat and its placement. There’s a possibility it could be why Stella can’t bark. Who knows, she may even get her bark back! The vet called Terry after her X-ray to say she’s settling in and that there were some puppies howling away and Stella was trying to join in but was too quiet for them to hear her. Poor quiet girl!

A temporary tracheotomy tube was placed to secure Stella’s airway. A rhinoplasty has been performed increasing the size of her nostrils and her soft palate was shortened. The tonsils and laryngeal saccules were removed along with the abnormal tissue on the right saccule and laryngeal lining. The vet sent off the abnormal tissue for another biopsy after nothing was found on the small samples from last week.

The surgery will not cure all of Stella’s breathing problems and she is likely to continue to snore and reverse sneeze. The surgery aimed to decrease the resistance to airflow when breathing and so reduce the risk of further collapse of the larynx.

Stella recovered well following the surgery, although she was still on her breathing tube for over 24 hours after the operation due to the immense swelling at the back of her mouth which was to be expected. She stayed over for another night to make sure she was breathing okay on her own and we collected her on Saturday morning.

When we picked Stella up she had spent a full day at the vets to make sure she didn’t have any problems which meant she’d need her tube back in.

At first we thought she looked better than we expected! She walked in to the room, a little lethargic but that was to be expected (she’s on a lot of meds bless her).

Her nose looks fantastic, you can clearly see the extra room to breathe she’s been granted. It’s a little bloody and bubbly from time to time, but it looks a lot neater post-surgery than we expected.

The part that kind of stuns us is the hole (stoma) in her neck post tracheotomy. It gets left as an open wound to heal naturally. Her front neck is fully shaved with this gunky hole in the middle of it.

Stella is pretty much completely breathing through her mouth and nose at this point, but we can see air going in and out of the hole, and she also sneezes out of it, which is as incredibly pleasant as it sounds.

For those with a weak constitution, we are putting the image under a spoiler block, so only click below if you really want to see it:

We have been really grateful for the thorough care of Stella from Vets Now Animal Hospital in Whitefield. Stella’s Specialist, Andrew Murdoch, called us 2/3 times a day to keep us posted on her progress with comprehensive updates and lots of detail which made us feel more in the know and at ease with her being away for so long.

Stella has a lovely new wider nose which when the swelling goes down she should be able to breathe a lot better out of. Here’s a before and after shot:

She is her absolute self already, albeit a bit more drowsy due to her meds. Luckily so far she is sleeping a lot. When she is active she is jumping everywhere and still pulling over her toy box.

For anyone considering getting their dog this surgery (and if you have a brachycephalic breed we strongly recommend it) we wanted to document the costs that were involved, with and without insurance this is a pretty expensive procedure and Stella in particular had a few extra requirements which may or may not come up depending on your dog’s situation.

Our vet originally quoted us an estimated £3000 – £3400, in the end the final bill came to £2678.21 which we claimed through our insurance. There were excess charges to be paid by us, as well as taxi fares, and a bunch of stuff to ensure her aftercare is as comfortable as we can make it.

Here’s a breakdown of her costs, including everything we can think of:

BOAS surgery bill cost: £2678.21 (covered by insurance)
Insurance excess: £100
Administration fee (Vets Now sort the claim for you): £30
Nebuliser & Saline: £40 (helps clear her mucus)
Baby socks: £3 (Helps to prevent her scratching)
Travel: £50
Tissues and wetwipes: (£10 and climbing, she’s burning through them)
Puppy pads: (£5, she can’t be walked outside for a few days until the hole closes)

So for anyone thinking about getting this surgery make sure you have extra cash for all the little aftercare bits.

And finally, a breakdown of the medication Stella’s on for the next week or so now:

So as you can imagine Stella is pretty doped up and sleeping a lot at the moment. She’ll be having constant care for the next week as her wounds heal and her medication starts lessening, so we’ll post an update next week to let you know how we’re getting on.

It’s been a pretty intense week but after she recovers her quality of life should improve massively, she’ll always have a little more trouble breathing than the average pooch, but after BOAS surgery we know she’ll be so much more comfortable, and it makes her less high risk for any future surgery she might need.