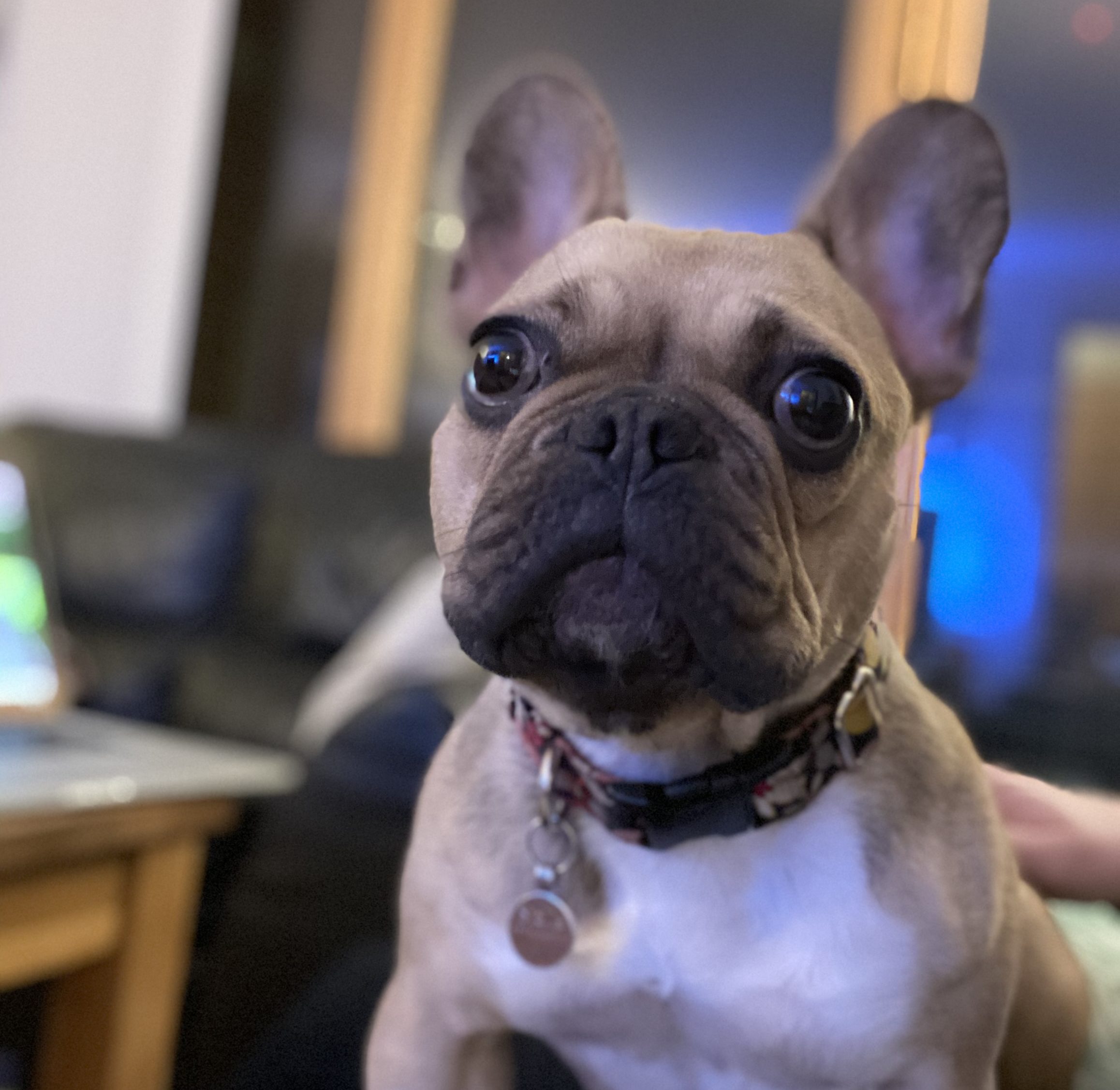 So last week we were just lazing around the flat one evening when we noticed Stella wasn’t quite herself. She was being quiet and mopey, so we started to fuss a little and noticed that she was also bloated and a little shaky. We’d also realised she hadn’t pooped a lot on that particular day, or eaten her breakfast, so put it down to a little constipation/upset stomach type thing.

We decided to get her to bed early and just see how she was in the morning. But she barely slept and seemed worse that morning, she was more shaky and grumbly, and doing the odd sudden jolt backwards, which was a little weird. She also still hadn’t pooped. It became quite clear by this point something was causing her pain/discomfort, so we took her to the emergency vets.

The emergency vets didn’t find anything too weird, so they gave her a painkiller and sent us on our way, which wasn’t exactly what we wanted but their Frenchie specialist wasn’t in at the time.

We spent another day waiting for her to shake whatever was wrong off, still under the assumption she’d eaten something dodgy somewhere, or has a blockage and wasn’t going because of that. She winced if we touched her stomach at this point.

Terry fortunately had the next day off so when she wasn’t better he got up and took her back to the vets, the painkiller had worn off by now so she was back to being shaky and grumbly and we didn’t want her staying like that.

So back to the vets she goes. This time the Frenchie specialist was there and agreed something a little more was wrong as he noticed her whole body was a little rigid. He suspected a back problem so admitted her for some blood tests, painkillers and an IV.

That’s when things took a real bad turn, Terry came home and I was in work. At some point the vet tried to give Stella a painkiller injection, but she got overwhelmed and had a BOAS attack? She basically started panicking because she was scared and in pain and it she was struggling to breathe, so they had to intubate her.

Which was the last thing we wanted because we know she’s at high risk for struggling to come out of anaesthesia and the irritation from the tube can cause her throat to swell which is really bad for French Bulldogs. I came home from work at that point because we were worried the worst might happen. It was horrible.

They got in touch to let us know they were going to bring her round, luckily we got a call about an hour later saying she was coming to and she was fine. She’d had her pain killers and we were back on track.

Whilst she was under they did an X-Ray. Turns out it was a back issue, Stella has some calcifications on a couple of her discs? The vet explained it to us as a step under a slipped disc. Which sounds kinda scary but all she needed was pain killers and bed rest. So after the £700 detour of her BOAS attack (thank God for insurance) the vet gave us Gabapentin for her to administer at home for a week, which is a nice change from the methadone she had the day before. We got to take her home that evening.

So that’s what she’d had for the last week. The annoying thing with Stella’s health issues is when we ask the vet ‘should we change stuff? Stop her jumping, picking her up etc?’ He basically said this is just a genetic thing, similarly to dachshunds, and she’ll probably have back issues once in a while no matter what we do.

So UGH. Having a Frenchie has really opened our eyes to how messed up the breed is, Stella’s a two year old, and she has a bad back, gets random sores because of genetics/allergies whatever, and she can’t really breathe. It’s horrible and just makes me angry to think this was something we (humans) did on purpose.

Anyway without going down a big rant about that (I’m sure I’ll separate that out sometime soon!) Stella is now booked in for her BOAS surgery tomorrow. The vet advised we got a rush on it because had she had the attack outside of the vert things would have been a lot worse.

While she was under the vet found a big mass in her throat which is taking up 50% of her airways, and whilst they don’t think it’s anything too malicious, they’re going to go through the biopsy and stuff tomorrow before the surgery.

It’s going to be a worrying day tomorrow, but when she’s had the surgery it reduces her risk of complications when having operations a lot, and will generally improve her quality of life. I can’t wait for that part of it.