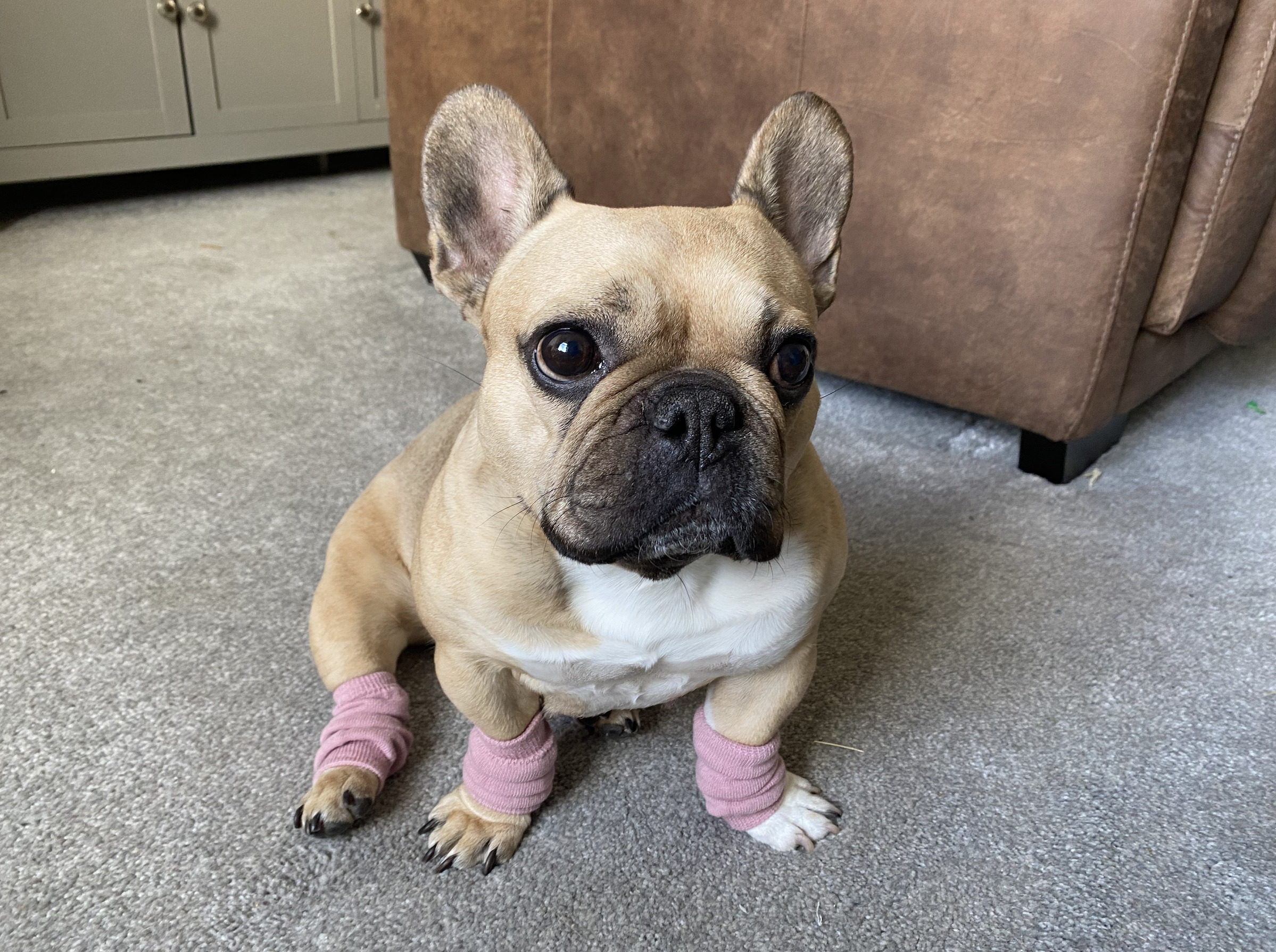 It’s been almost three years since Stella’s BOAS surgery. So I guess this will serve as an update on that and where things are at with her now.

Perks of the BOAS surgery

Since having her surgery in 2019 Stella was doing really well, we were able to take her on walks and adventures with our friends (weather permitting, not too hot not too cold!). Her life in general had improved a lot and she was doing really well with exercise, well, as much as any Frenchie probably does, she’s never going to match the limits of her border collie / golden retriever friends, but she generally seemed much more comfortable and importantly was able to calm down relatively quickly after getting over-exerted.

We’d started to notice Stella getting a little more out of breath again earlier this year, she was starting to seemingly get back to the point she was at before her surgery.

Summer and the heatwaves hit and she was honestly a bit of a nightmare, we had to get off a train half-way one day while she calmed down and cooled off (for what it’s worth the train wasn’t super hot, but a mix of ‘warm’ and her travel anxiety meant she just couldn’t stop panting).

After that ordeal we decided it might be worth checking in with our Vet. Back when she had her surgery they found a benign mass growing in her throat and there was always the chance that might grow back, so we figured that was probably it and she would need it cutting down again.

We took Stella to see Andrew from Vets Now in Bury again, it felt right to take her back to the person who performed her surgery, was a specialist on the illness and knew her case. So we travelled over to get his opinion again.

Andrew talked us through a bunch of possibilities: New hardening of her soft palette, the growth coming back, cancer or tracheal collapse.

She had a laryngoscopy which confirmed the latter scenario. She has laryngeal collapse grade II (collapse of the cuneiform processes of the arytenoid cartilages).

So the good news was she didn’t have a recurring growth, but she does have a collapsing voice box. This was arguably one of the less ideal scenarios as it’s not something that can be cured, rather it’s a progressive problem and something we will have to accommodate as we go.

The short-term plan is do nothing except limit Stella’s physical activities. She’s not a super active dog as it is, we’ve took her on some long walks before but only once in a while and mostly just do a lap around the local park when walking her, nothing too intense.

Tracheal Collapse gets worse with age and exertion, basically the more Stella gets out of breath the more pressure she’s putting on her voice box and the weaker it will become.

Currently it’s not bothering her everyday behaviour, it’s just causing her to have lower thresholds for heat and exercise, which we can control.

As things progress we will apparently hear her start to cough more, it could take months, if we’re lucky it could take years beyond her lifespan.

If it does become an issue to the point of her struggling a lot, we have options, Andrew talked us through the the possibility of performing folded flap palatoplasty to reduce the thickness of her soft palette, which will help slow the progress of the issue, but ultimately if it does ever become a life-limiting problem we may need to have a permanent tracheostomy put in, which comes with some of it’s own dangers.

So as usual not the best news for Stella, but we’ve become pretty accustomed to the fact that we have a pretty special needs dog, we know what works her up and we can prevent majority of it. She’s still happy to have short play sessions without getting panty and can walk through the park on cool days with no trouble right now.

One of the real worries is travelling with Stella. Sometimes we need to take her somewhere, or drop her off with family, and she gets really anxious in cars. One of the ways we’ve managed this is by using Trazodone, which is an anti-depressent Vet’s Now gave us after her surgery, it calms her right down most of the time, or at least enough so that she can manage a short car journey without struggling. I’d definitely recommend speaking to your vet about it if you have an anxious BOAS dog.

Speaking of car journeys, here’s a photo of our girl high as a kite after her laryngoscopy:

We’ll probably write more on this as time goes on, would love to hear from some people who’ve had experience with this issue and how they’ve gone about it.