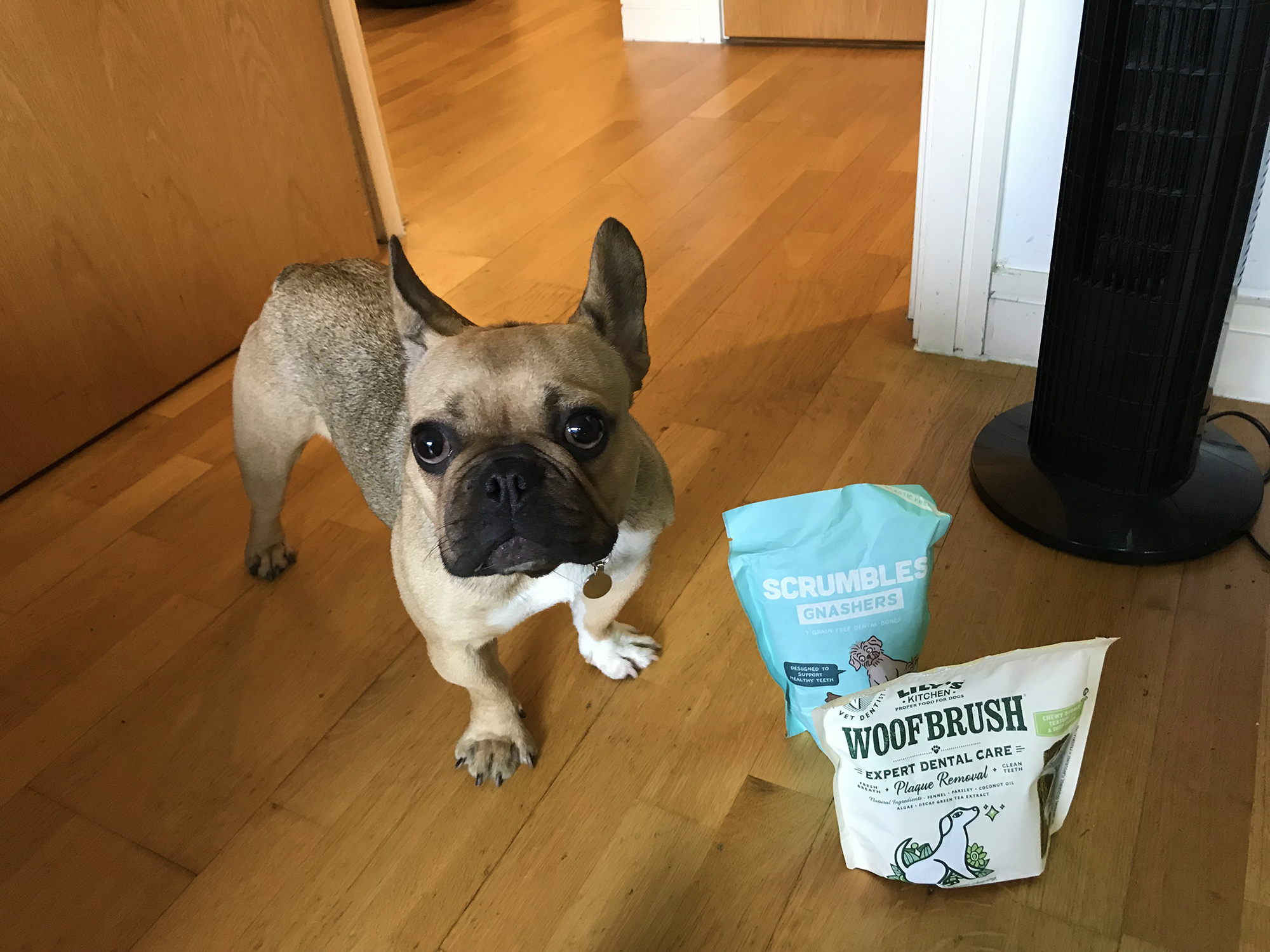 After reading some pretty negative stuff about Dentastix I decided to try some alternatives with Stella. I prefer to buy her things from smaller, independent stores anyway.

After doing some Google research there were two types of doggie dental treats which had decent reviews and kept coming up. Those were Lily’s Kitchen Woofbrush Dental Chews, and Scrumbles Gnashers.

So I bought a small pack of both to give them a try. Here’s how things went.

The Woofbrush Dental Chews were the first of the two to arrive, so we tried them first. A pack of seven chews cost six pounds, which is a fair bit more expensive than Stella’s Dentastix, but that’s not necessarily an issue if they were really good, we’d save by buying a bulk.

I opened them up and my first impression was ‘Wow these are big’, we bought the pack of small chews, but they’re a good 7cm per chew and quite thick as well, so because Stella is small even by Frenchie standards we had to cut them up.

So I cut them up into about five small circles at first. Gave Stella one, but she choked. Cut it up again, she struggled some more, until I cut them up small enough that she could have a couple of chews before swallowing them down.

The chews have a nice texture – kind of like a hide chew with air holes in it, and it’s easy to see how they’d be beneficial for her teeth. But if something is hard to chew, Stella typically won’t bother and just try to swallow something down.

It’s a bit of a problem, and for that reason we didn’t think these chews were suitable at all. They’re really solid, and if your dog isn’t dumb and does chew their food, I reckon they’d be really good for cleaning their teeth.

Sadly that’s not the case for Stella, we’ve had to cut them up so much that they’re being used as a healthy snack treat until she runs out.

Scrumbles Gnashers were a fair bit cheaper at £3.49 for seven treats. They also go the extra mile and have nice paper packaging, which isn’t something that would be the decider for my choice in product, but it’s a ‘nice to have’?

Anyway, Scrumbles Gnashers are more like traditional hard biscuit treats in texture. they seem a little harder and the ingredients add a varying texture.

If I was going to guess, I’d say these probably wouldn’t clean Stella’s teeth as well as the Woofbrush’s would have if Stella decided she wanted to actually chew them. They seem like the longer lasting, better textured of the two.

But Stella chewed the Gnashers. So they ended up being the clear winner. I think because they have more of that biscuity texture she can comfortably break them apart and spend a fair bit of time on them.

Chew time is important right? I mean, that’s how they do the cleaning. Stella will chew one of these longer than her old Dentastix too, so that feels good.

They’re a bit on the large side again, they’re not much smaller than the Woofbrushes, so we did choose to snap them in half and one of them after a meal feels sufficient for her. But if we gave her a full one I’m comfortable that she would eat it without choking.

As far as taste goes I don’t think Stella’s fussed, she really likes them both. But the obvious winner for us was the Scrumbles Gnashers. They were the cheaper and more successful of the two. We’ll be buying a big box after this pack is finished!