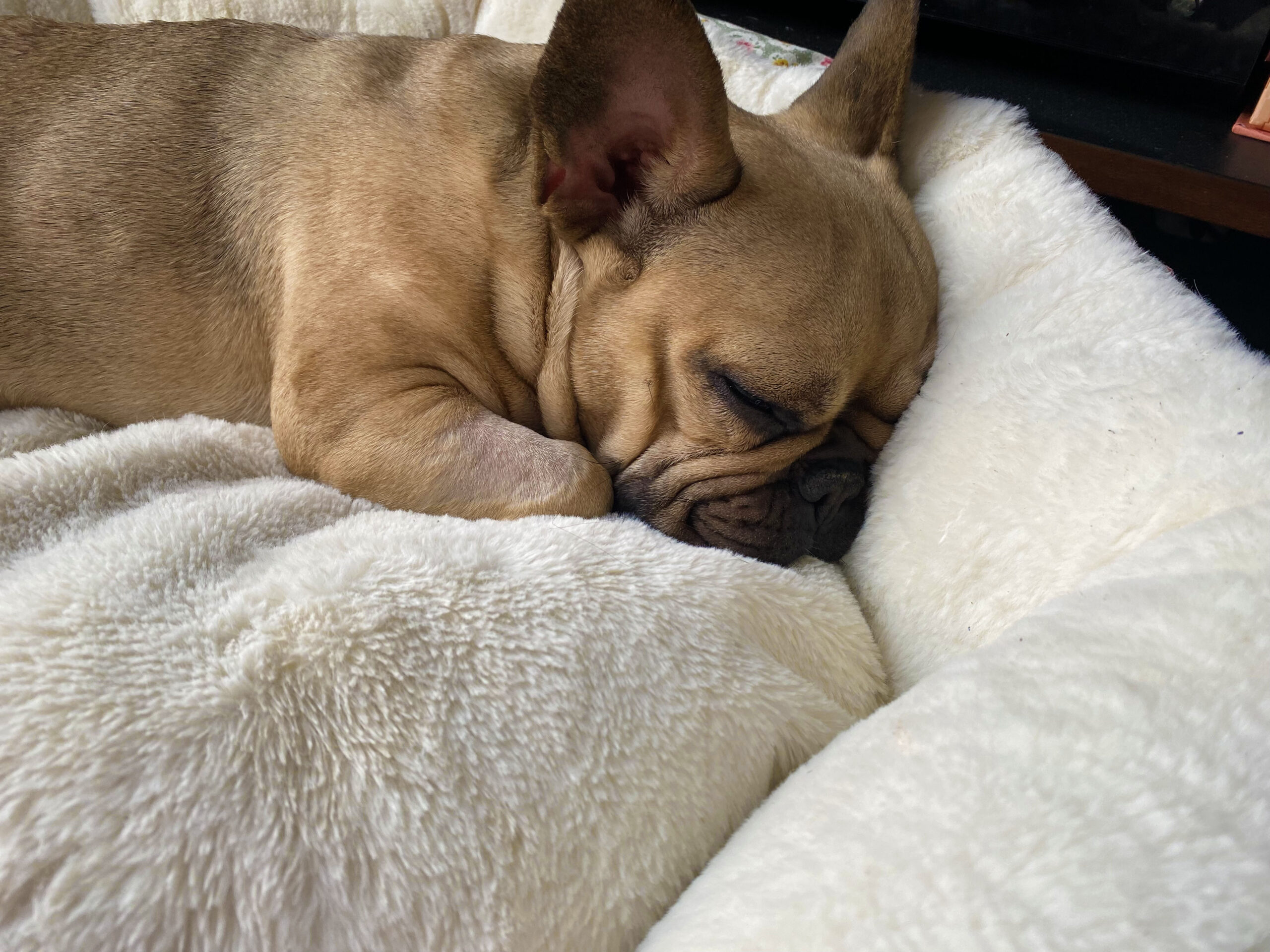 It feels like we’re only blogging medical stuff here, so I’m going to fix that up soon because I swear we have a lot of happy memories too. But here’s a blog post about our nightmare earlier in the year with Stella.

So, we moved house in April and during the move Stella was getting rather excited, as she tends to do. In that excitement she was jumping around and at one point she leapt on to the bed, missed and fell kind of funny.

We didn’t think much of it at the time more than ‘ouch, that looked uncomfortable’, but Stella continued to wander around and be happy and fine for the time immediately following the event.

First visit to the vet

The next day, Stella was in the new flat and was a little quiet, we weren’t sure whether to put it down to being anxious in the new home. But then she started shaking a little.

We’ve had Stella long enough now to know that she only shakes for two reasons – she’s cold or she’s in pain. It’s a hot summer day so we quickly get the idea that something’s not right.

So we hopped in to a car and took her to the Emergency Vet (Vet’s Now in Whitefield).

We’ve had an issue with Stella’s back before and we expected it was the same thing, last time she had it they prescribed Painkillers (Gabapentin) and bed rest. Sure enough, the vet accessed her walking, reflexes and gave her the same thing. Along with a warning to bring her straight back if she starts struggling to walk.

Second visit to the vet

With painkillers and some rest the next morning Stella was acting more like her happy self, she was on bed rest so we weren’t going to do much for the day. But as the morning went on she was quickly getting iffy on her hind legs. By lunch time she was really struggling to support herself on her back legs.

So we did what we were told, got her straight back to Vet’s Now. This time they did the same assessment of her walking and reflexes. But they were way off this time.

It became a case that she needed a MRI and surgery, immediately. Queue absolute horror.

This happened on Easter weekend, so the vet was worried about finding someone available locally. After an hour or so of waiting they referred us to the ‘Small Animal Teaching Hospital’ in Liverpool.

We drive there, Stella is doing well at this point because they dosed her with morphine and she was just… high as heck during the trip, but obviously we were in a panic.

We gave Stella to the vets in Liverpool and they assessed her again on her ability to walk and reflexes. They gave us the scary statistic of Stella being a 3-4 in emergency levels, where 1 is fine and 5 is potentially going to be paralysed.

It’s crazy to think how it escalated so quickly from the point of that little fall. but that’s where we were at.

So she went in that evening and had her MRI and an operation on her back.

Stella had IVDD (intervertebral disc disease), there’s a lot of information online as to what it is, but I’m going to put it in the words our vet used, which was something like:

‘The discs in her spine all have these cushions between them, in breeds like Stella it’s not uncommon for these cushions to come loose, or ping off when she’s putting too much strain on her back, which causes it to get stuck and can be very painful’

It had led to her having spinal compression and her brain couldn’t reach her back legs, I’m paraphrasing somewhat because I’m not a vet and don’t really know the technicalities of it. We had to wait for the surgery to happen from home and just spent the evening pretty much doing nothing but worry.

The good news is, we got the call that evening to say her surgery went extremely well. So Stella has the spinal surgery and was in recovery that evening.

Stella spent the next two nights in the vet, we were able to pick her up on the Wednesday after Easter. Her recover has gone really well. Especially to say there was a chance she might not be able to walk again.

There’s a lot of steps to her recovery, but she seems to be going through them really well. Here’s the outline of what’s expected:

Not surprisingly they have given her a lot of medication for the next few weeks, these are:

The vet did say the Tazodone may be optional based on how active she is, because they are a sedative and she shouldn’t really be active for the first few weeks. We’ve had to keep her on them though because without them she is far too hyper now that she feels better in herself.

It’s eight days came home, and she’s doing fab. She’s happy and not expressing that she’s in pain. She was super wobbly on her back legs at first, but it’s definitely getting better every day for her.

Her physical therapy needs doing three times a day and includes sitting her down, making her look in all directions, massaging her back legs and having her lie on her side while we move her legs in a bike-riding motion. She thinks I’m playing a game whenever I do the bike thing and tries to playfully bite my hands.

This IVDD thing is likely going to be a part of Stella’s life at various points, that’s been established. But there are changes we can make to mitigate her risk going forward. These include:

The vet did say that it’s nothing to blame ourselves over and no matter how many rules we put in place, dog’s gonna dog. We’ll never be able to stop her jumping 100% of the time, or make 0 mistakes with her. But they did say the more we do to mitigate the risk, the odd time mistakes do happen they’re less likely to result in a major problem again.

We’re lucky enough to have good insurance with The Co-operative Pet Insurance. So majority of what Stella needed was covered, but not all of it.

We have £5000 coverage for the year, the total of all this came to £6300, luckily we also have savings and emergency funds, so we could afford everything she needed. The moral of the story is make sure you have pet insurance because when things go wrong they sometimes REALLY go wrong.

We’ll provide updates here and via Instagram as she recovers. Thanks for all the friendly support during the process.